Which birds of prey can you meet in Altai? Part 1. Eagles

During our trips in Altai we observe a lot of raptors, flying in the sky, sitting on the ground, eating carrion or sometimes even feeding chicks in the nest. We decided to make a special section on our site devoted to birds and animals of Altai. But we wouldn’t like to give a description of all species which inhabit Altai. We will show you the birds which we observe rather often during our trips and pictures which we made ourselves. 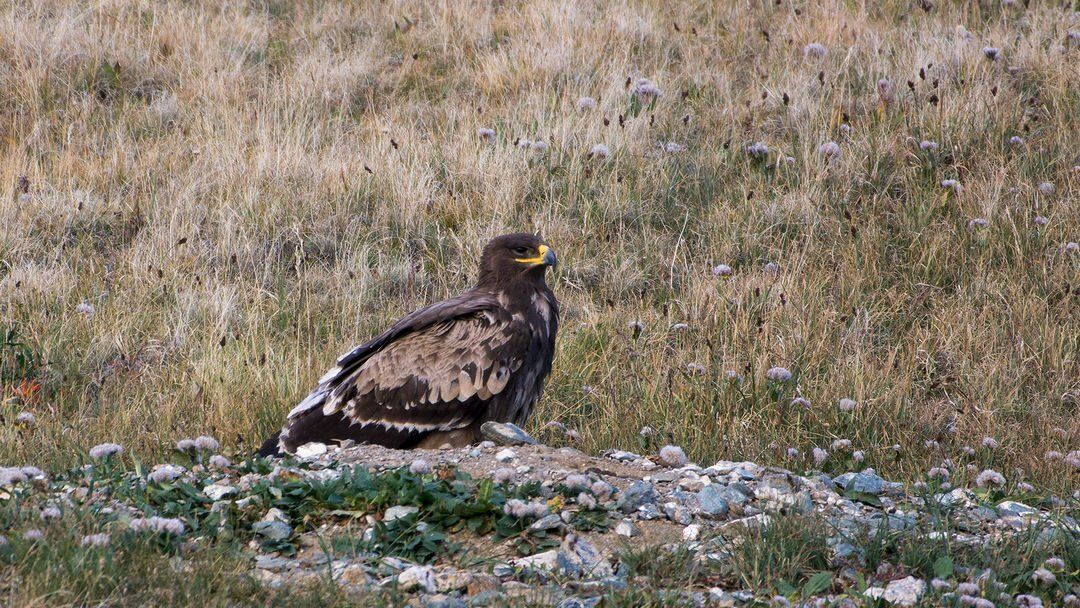 The Steppe Eagle is a medium-sized, migratory eagle, which has mainly dark brown feathers. The wings are lighter than the body, and look greyish. Flight and tail feathers look grey, and can be with dark grey.

As you can see from its name, the Steppe Eagle lives in an open habitat like steppes, desert, semi-desert, grasslands and even agricultural areas. It also settles in the lower parts of mountains and can be found in the foothills of high ridges. Nests can be found up to 2000 m. In Siberia it lives in Altai and Sayany mountain areas and in the Baikal region. In Altai, Steppe Eagles usually appear in March or in the beginning of April, although it is possible that late birds arrive till the middle of May. The migration in the autumn starts at the end of August; but the majority of the Steppe Eagles will leave in September.  Birds from Altai stay in the winter mainly in south and south-east Asia.

Steppe eagles have an alternating menu, such as mammals, birds, reptiles, insects, and carrion, usually from 50-250 g in weight. In Altai, Steppe Eagles specialize in susliks (a kind of ground squirrels). They hunt in various ways, walking or flying. When they are flying, you can see them often circling and diving and before they catch the prey, they have to persue it. Stealing the prey of other flying raptors is also common. Other ways to get their prey are waiting at the entrance of holes from rodents.

Steppe Eagles breed with a distance of 0.5-1.5 km from each other. The nest can be found anywhere, they are built on small hills among the shrub spots; on ground level, on rocks or on separate trees, Steppe eagles use dry twigs to build the nest, and grass, rags and horse droppings are used for lining. A pair of Steppe eagles will use a nest for several years. In April to early May 1-3 eggs are produced. Chicks hatch from the egg on the end of May. Both parents take care of feeding the nestlings. When the nestlings are about 60 days old, they will fledge from the nest. 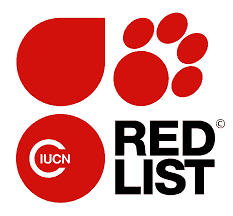 In 2015 the Steppe eagle was classified by IUCN as Endangered (EN).

We observe flying steppe eagles rather often. In August 2016 we were camping near the rock with the nest in the valley of Chagan-Burgazy. A young chick (already rather big) still was in the nest. 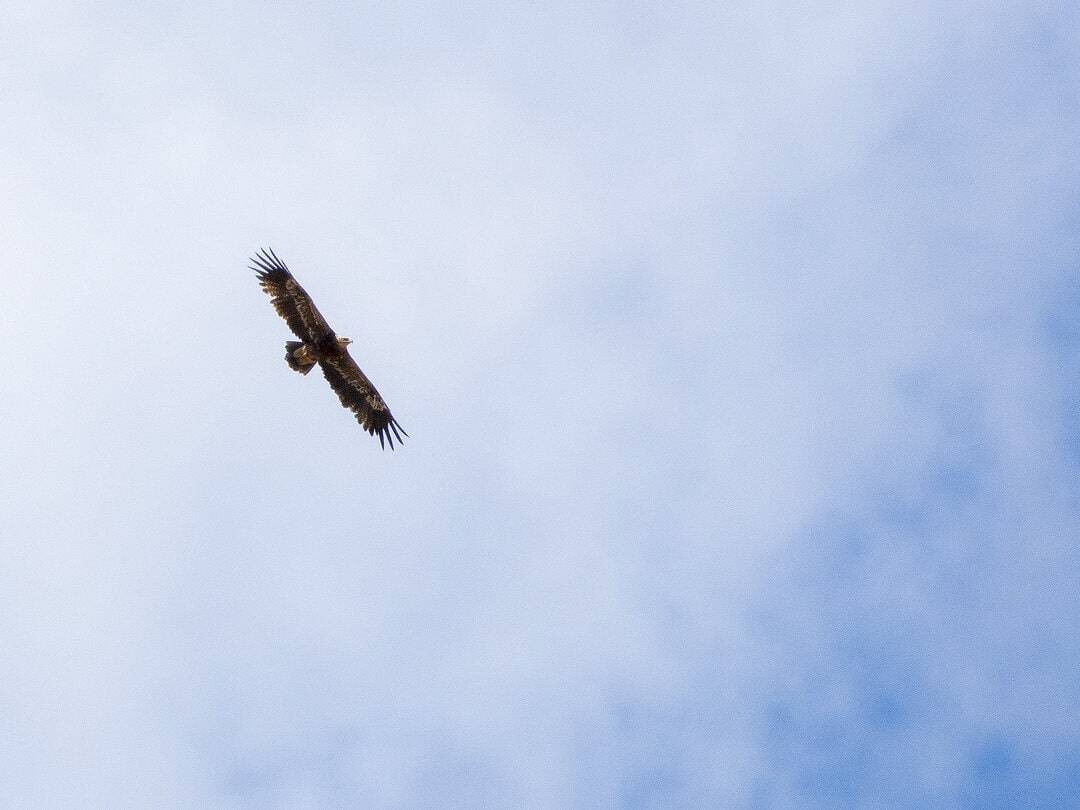 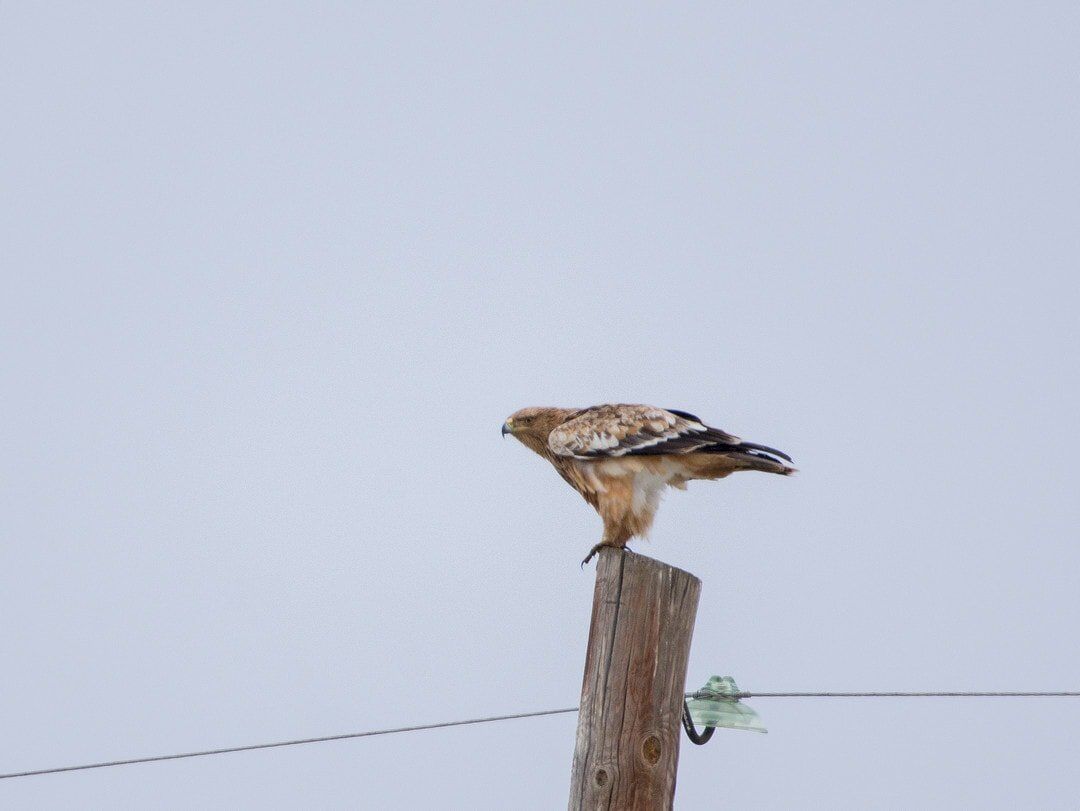 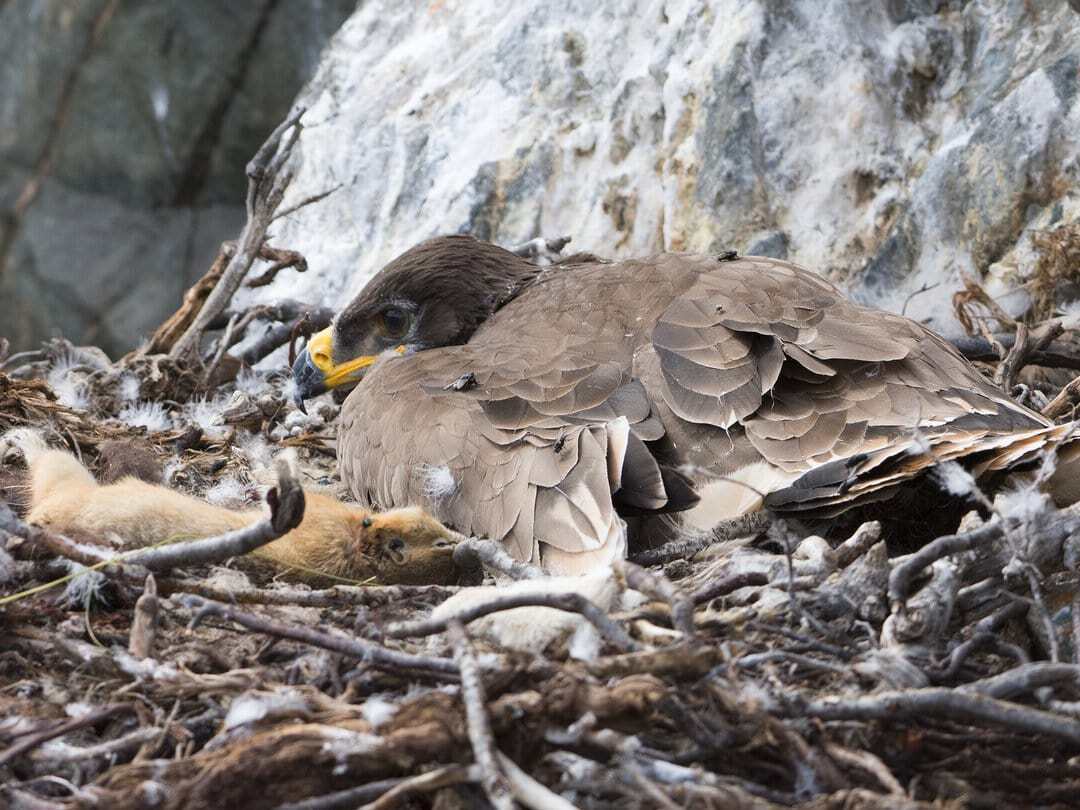 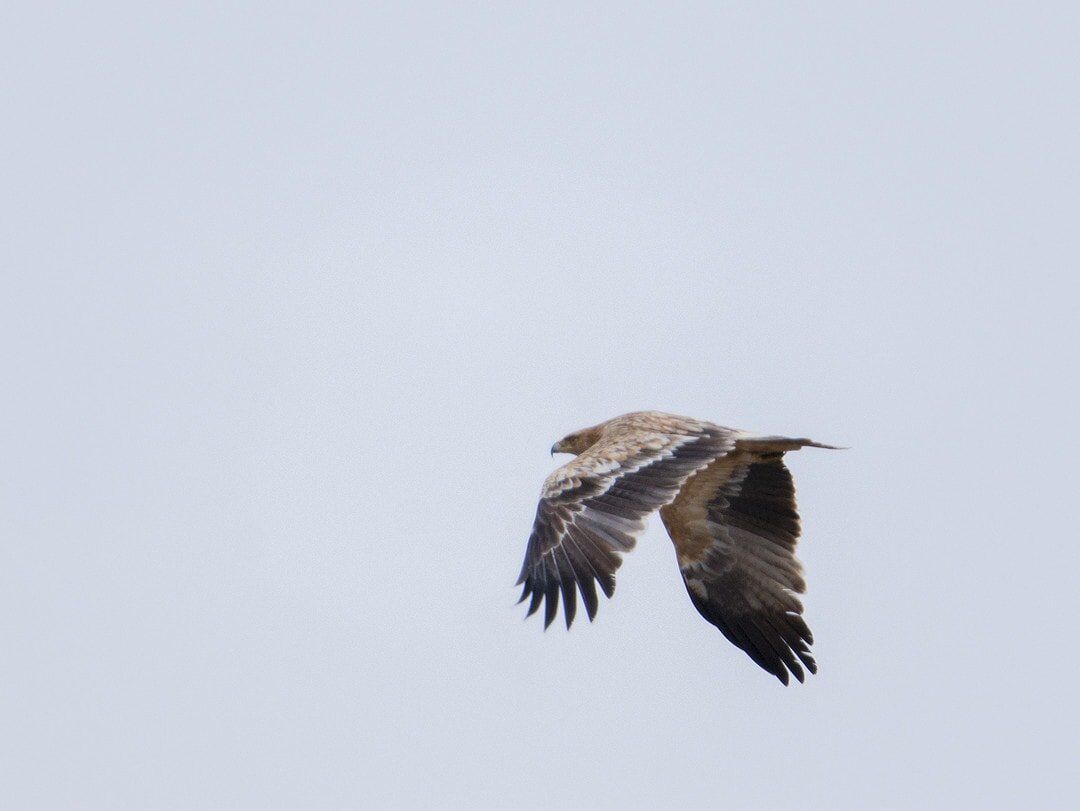 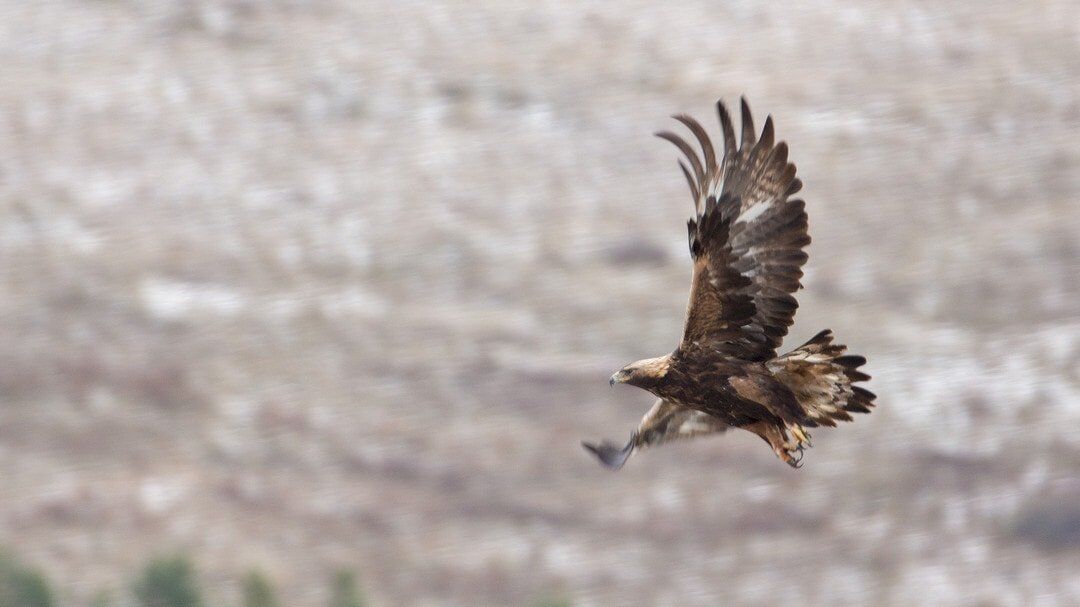 Golden Eagles can be found in most continents. They are large, strong raptors that live in a range of open habitats. The body is dark brown and the head and neck are light-brown. The flight feathers and underwing coverts are covered with dark gray feathers, and the tail has a gray, almost black band on the ends.

The Golden Eagle seems to adapt very well as they have one of the widest distribution of all eagles. Despite that, in Siberia Golden eagles are not numerous in each area. They can be found in mountains up to 3000 m, and in combinations of taiga, forests, steppe, groves. Adult birds mostly stay in the same area, except in the very north. Juveniles spread more widely. In Altai, after the breeding season, Golden Eagles disperse widely. they will disappear in late October or November, some of the birds stay for the winter.

The Golden Eagle hunts mostly for medium sized mammals and birds. The main part of the mammal species are Marmots, Hares, Rabbits and Foxes (incl. adult foxes). Carrion also is a big part of their food resource, especially for young birds who still have to learn a lot about hunting. Golden Eagles hunt by soaring, flying low over an area, or while sitting on a perch. They dive at speeds up to 241 km/hr to get their prey, and take animals up to approximately 6 kg.

Distance between breeding pairs, is at least 2-3 km. The nest is built on the rocks or in trees. They use dry twigs and it is lined with hair, rags and next to that fresh twigs with leaf are also used. Each pair of golden eagles have 2-4 nests, which are used on turns. Eagles start to repair old or build new nests in the period March till the beginning of April. They will have usually 2 eggs (it is rare they have 1) in April till May. Incubation time is about 45 days. Both parents take care of feeding the nestlings. Around mid-July – August the juveniles will leave the nest. They stay together for the rest of the summer, and leave each other in winter time only.

More often we met Golden Eagles in the southern part of Altai krai – in Charyshskiy region. In August they are used to sit on big rolls of hey. 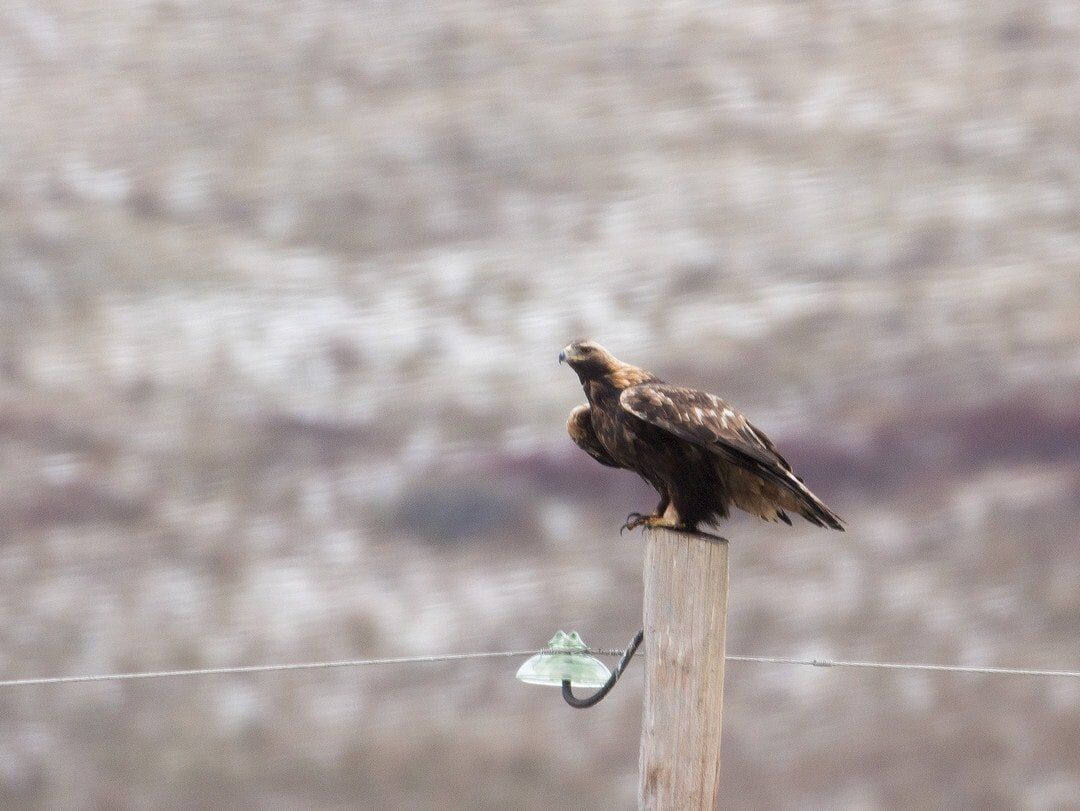 ← How we built the UAZ. Backstage 11 December – International Mountain Day →